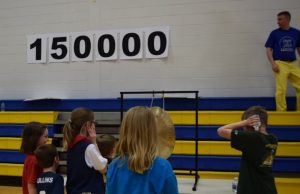 In 2018 as Central Baptist Church of Johnson City, TN began planning for their 150th anniversary in 2019, they talked about the usual aspects of such a celebration – remembering the great history of the church, having a huge dinner-on-the-grounds celebration, and so forth. But they also wanted a way to show their community how much they love them and how much God loves them.

They invited David Crocker (Inasmuch Founder and former pastor of CBC) to work with the 150th Anniversary Team specifically regarding a community-wide service event. He suggested that they conduct a food packing event in which 150,000 nutritional meals would be packed. Their immediate response was “Let’s do it!” On April 6, 2019, over 500 volunteers from Central Baptist Church, other area churches, and other groups in Johnson City packed 150,000 meals for the hungry people of Northeast Tennessee. View some pictures from the event here.

These meals were donated to Second Harvest Food Bank of Northeast Tennessee serving eight counties in the northeast corner of TN. Second Harvest will distribute them through their normal channels of distribution over several months. Executive Director, Rhonda Chaffin, said: “Thousands of our neighbors in northeast TN will receive these meals. You have truly taken ‘a bite’ out of hunger through this event.”

Eight churches, four schools, United Way, Gideons, and five local companies sent volunteers. A total of 575 volunteers worked in this huge event. Jeff Keller was Central Baptist’s coordinator for this event. He said: “The church wanted to mark the milestone with something other than a big cake. Our 150th coincides with the sesquicentennial of the city where the church first held services in 1869.”

David Crocker said: “This is by far the largest food packing event in which Inasmuch has been involved. Yet, it was one of the smoothest and most fun. I am grateful for the opportunity to work with some of my old friends in doing something to show the entire community how much Central Baptist Church cares for them.”

Inasmuch has had a banner year so far in 2019 in food packing, having packed 265,000 meals already with another 100,000 “on the books” for the remainder of the year. One of those events for later this year came as a direct result of the large event in April in Johnson City. A Lutheran Church in Johnson City has scheduled their own event in which 20,000 meals will be done in October.

To learn more about our food packing ministry and how your church or organization can host your own click here.