David Crocker (former Executive Director of the national Operation Inasmuch ministry), Interim Pastor of First Baptist Church, Weaverville, NC says: “When we decided to include in our Inasmuch event this spring ministering to people at the local laundromat by feeding the washing machines and dryers quarters as well as otherwise helping people with their laundry, we were told it would take a lot of quarters to do that. So, we made that a weekly collection task during Sunday School and we collected far more quarters than we needed!” 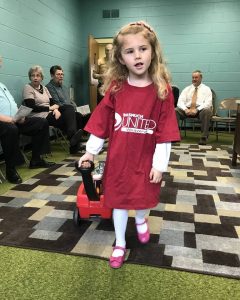 Pictured here is Carissa Alexander, a first grader at FBC, Weaverville who was tapped by Crocker to go from class to class asking for quarters. It became something everyone looked forward to. Some brought medicine bottles or sandwich bags filled with quarters. Some gave “folding money” which was later changed into quarters.

Crocker says: “The plastic jug we used to collect the quarters soon became too heavy for Carissa to carry, so we found a small wagon in which she placed the jug and pulled the wagon from class to class. It was one of the most effective fundraising efforts I’ve ever seen! Let’s just say the class of senior adult men were helpless against Carissa’s pleas for quarters!”

Crocker quips: “This is what I will be remembered for at First Baptist, not the sermons I preached or visits I made, but the collection of quarters for Jesus. And that’s just fine with me!”

David Crocker is the Founder of Operation Inasmuch. He was a pastor for 38 years prior to launching the Inasmuch ministry which has equipped more than 2,100 churches in 25 states and several other countries to mobilize their members in mercy ministry. David’s passion is seeing believers serving as the hands and feet of Jesus as a lifestyle.