A “Founder” of Operation Inasmuch has Died 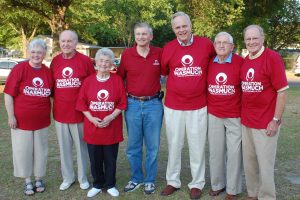 Colbert Dilday of Snyder Memorial Baptist Church in Fayetteville, NC, the place of origination for Inasmuch, passed away on June 13, 2020. His obituary rightly says he was one of the founders of Operation Inasmuch because he was on the original Missions Committee of Snyder Memorial who planned the first Inasmuch Day in 1995.

The Sunday morning worship following the first Snyder Memorial Inasmuch Day in March 1995, the church celebrated how God used them to spread His love throughout the Fayetteville community. Pastor David Crocker did not preach that Sunday. Instead, he invited congregants to share from their experiences with Operation Inasmuch. “The sharing was so enthusiastic that we had to call time,” says Crocker. “It was one of the most joyful times I have ever experienced in 40 years of ministry,” he adds.

Dilday was one of the people who shared in that celebration. “I don’t remember everything he said,” says Crocker, “but I do remember he said he’d never been so proud of his church than he was on that Saturday of Inasmuch. One of Colbert’s comments proved to be prophetic. He said: ‘I hope we won’t put a period on this experience but a comma.’“

Colbert Dilday is one of the reasons God chose Snyder Memorial Baptist Church to be the people to initiate the Inasmuch ministry. His love for serving people in need, his passion for using his skills to demonstrate God’s love in acts of kindness, and his understanding that the church is a mission outpost for God’s grace made him the perfect person to be part of the vision of Inasmuch in the beginning and its ongoing.

Dilday also exemplified lifestyle compassion ministry. He was instrumental in establishing the Carpentry Ministry at Snyder Memorial that continues to this day. This ministry has built hundreds of wheelchair ramps in the Fayetteville area and made needed home repairs for people who could not make the repairs themselves or afford to pay for them.

“No one was more pleased than Colbert to see the Inasmuch ministry established as an ongoing, self-sustaining ministry that has been shared with congregations in 25 states and several other countries,” says Crocker. “He was and always will be one of my heroes in ministry. I am wonderfully blessed to have known him and worked alongside him for a small portion of my life. I am better today because of Colbert and others like him at Snyder Memorial!” says Crocker.

David Crocker is the Founder of Operation Inasmuch. He was a pastor for 38 years prior to launching the Inasmuch ministry which has equipped more than 2,100 churches in 25 states and several other countries to mobilize their members in mercy ministry. David’s passion is seeing believers serving as the hands and feet of Jesus as a lifestyle.